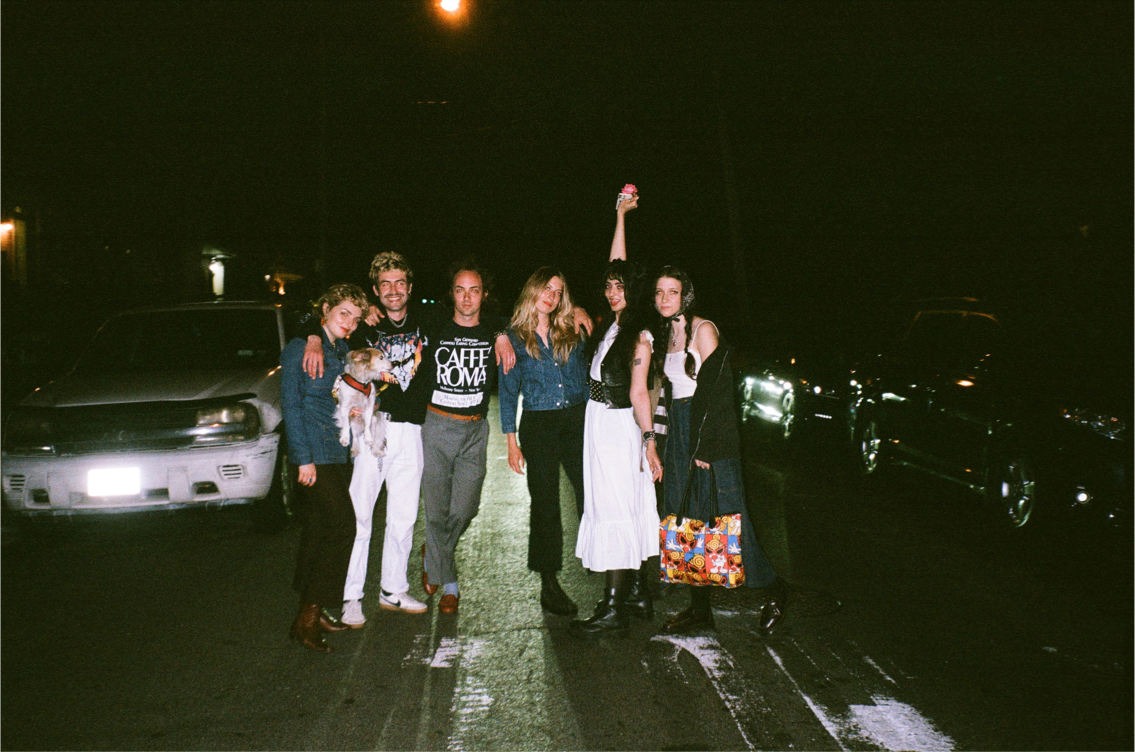 astels by candlelight, a spilled bottle, cigarettes burnt to the filter, the outline of a face being tanned by a flickering neon light, the vinyl debut from NYC's Phantasia is hard to get out of your head. A polytropos of black lace tinged beachfront kitsch melted together with the clever gloom of prime-era American indie, all topped by the wavering and haunting vocals of what could be likened to a baritone Siouxie Sioux. Elements of death rock, pure pop, punk, and rock and roll are all here fighting for space amongst lilting synths, reverb-soaked guitars, and muscular drumming.

Recorded and mixed by Sasha Stroud, this captures both the spirit of their influences — the Feelies, Alaska y Dinarama, Bruce Springsteen, and Pylon — but holds nothing back in terms of what these songs are capable of sounding like in the 21st century. Each record comes in a jacket adorned with art by Phantasia's own Dylan Cameron." — J.F.

NYC’s PHANTASIA drops a very well-rounded debut LP. Riddled with sentimentality (“Falling Falling”), darkwave bliss (“Out of Spite”), and poppy interludes (“All the Flowers”), this album is a culmination of noted influences like BRUCE SPRINGSTEEN and PYLON, to name a couple.

Mixed with an original styling, I find a debut that captures this band at its rawest, and most close to the heart. The closer “Leftover You” reminds me of the REPLACEMENTS’ “Answering Machine,” or any of their B-side reveries, for that matter. The vocalist warbles through elongated notes of heartache, sounding like she’s hanging on to the microphone for dear life. This is worth your time. — W.S. Did you see Bill & Ted’s Excellent Adventure? You know how there was one album that united the world into perfect harmony, eliminating wars and creating a guitar-based utopia? That wasn’t fiction, it was a prophecy, and it was fulfilled by Phantasia’s Ghost Stories.

One listen to this album and I immediately decided that the Beatles were shit, all other music was null and void, and that entertainment as a whole would never be the same. In fact, I gave up on sex, film, basketball, smoked meats, hazelnut gelato, even writing. This is my last communiqué.  Thanks for the memories! (Our editor Grace is one of the brains behind this album.) — F.P. I’ve been bumpin’ this gem lately real talk. “All the Flowers” is the JAM — the chorus is never-ending ear candy that gets to the point! Imagine if Altered Images, Dexy and the Midnight Runners, Siouxie Sioux, and Bruce Springsteen all decided to get their jam on together, the outcome would be the sibling to Phantasia. I love the urgency of their songs, like “Out of Spite” and “Fate of the Martyr,” because they pack the kind of melodic punches that keeps me coming back. Ok, ok, one of my Big Tunes from Ghost Stories is “Falling Falling,” this sun-kissed blissed-out gem makes me smile!!! Let's chat!
Check out my resume